Reflections Books had its roots from A Course of Miracles Group that was held at Carole and Geoff Webber’s home for three years in the mid 1980’s. Carole was also renting videos and doing rebirthing sessions and her front room looked more like a healing centre or a retail store. It was a comment by Geoff that began the process of opening a store. ‘I think you need a bigger space’ Geoff said one day. Carole liked the idea and shared it with the Course students. They said they would support her expansion. Lloyd who was in the group had just sold his house and was willing to come into the project as a partner.

On March 21st, 1988 after an inspiring trip to Sedona the previous year for the Harmonic Conversion, Carole and Lloyd opened Reflections Books. The name came from a book, ‘Reflections’ by Brook Tully that had been given to Carole by a friend. They wondered if anyone would enter the store. They need not have worried because from the first day, customers streamed in to buy the many books and gifts on the shelves. One eager customer commented, ‘What took you so long? We’ve been waiting for you.’ 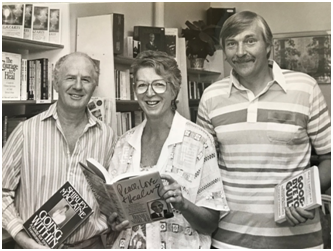 Soon classes began in the centre of the store and displays had to be moved every day for yoga classes, rebirthing groups and meditation sessions. Another Course in Miracles group met there and a new Toastmasters club, Crystal Clear Speakers, was formed in 1989. The club still is still holding meetings but it now meets at The Coquitlam Library on Poirier St.

When the big box stores opened in the late 90’s, book sales plunged and there were a few difficult years. The store morphed into more of a metaphysical gift store than a bookstore, but books were still a staple. Carole was tired of being restricted in the store because of having to move everything for classes. An office space became available upstairs and she wanted to expand to a healing centre up there. Lloyd was not sure this would work and Carole and Geoff offered to buy him out of the business. It had been a good partnership for nine years when Lloyd left in 1997.

Chip, the store cat came to us later that year. The animal hospital nearby found him for us. He was three or four years old at that time and had been brought in injured to the vets. We believe he was blind in one eye. Chip was with us for 16 wonderful years and he had the staff well trained by the time he passed away in June 2013. He is missed by many of our customers and all of the staff.

The Oasis Wellness Centre opened upstairs in September 1997 and it was initially called The Oasis Healing Centre. Now the store could expand and the classes could expand too. Carole and Geoff have never looked back and now that Geoff is retired from his regular job, he helps out with much needed maintenance. There are three support staff members in the store and several practitioners upstairs.

2018 is the store’s 30th year and Carole realizes that it is time to let the store go. Her daughter-in-law, Melissa Webber, asked if she could take over the store and Carole is thrilled to have Reflections to stay in the family! 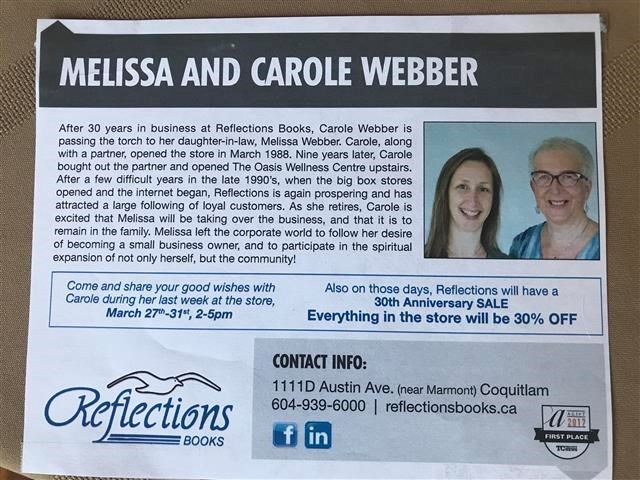 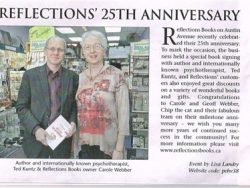 Article in Snap newspaper, May 2013 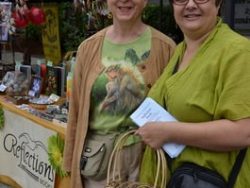 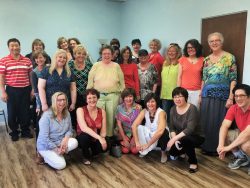 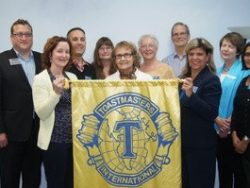 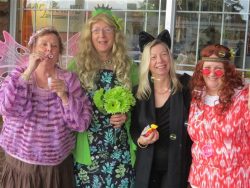 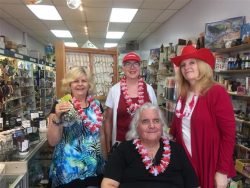 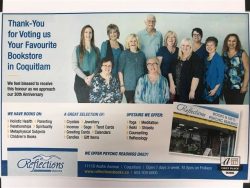